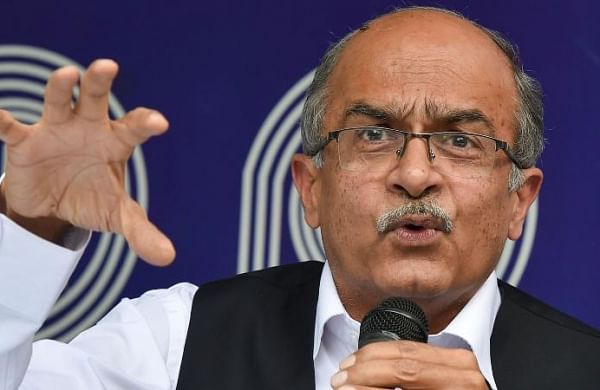 NEW DELHI:  A three-judge bench of Justices Arun Mishra, B R Gavai and Krishna Murari on Tuesday reserved the verdict on the quantum of punishment to be awarded to advocate Prashant Bhushan in the suo motu contempt of court case for his two tweets. Here is the courtroom exchange: Justice Mishra asks Attorney General K K Venugopal: Tell us what is to be done.

Venugopal: Give him (Bhushan) a warning and let him go. Justice Mishra: There is a positive part of the statement by Bhushan in which he says he has faith in this institution. But at the same time he says, he won’t apologise since he hasn’t made any mistake… If a person says he didn’t make a mistake and he won’t apologise for it despite repeated opportunities, what will be the purpose of saying don’t do it again? Venugopal: Let the democracy follow in this case when he has exercised his free speech.

It will be tremendously appreciated if the court leaves it at that.Justice Mishra: He has made several disparaging remarks against this institution, judges of this court. Venugopal: He won’t do this again… My Lord, also see all the work he has done, he has filed so many PILs for the benefit of the people.

Justice Mishra: Let him say this. It was so simple. The case was about two tweets but he later has colours to these tweets and filed additional explanations and arguments… AG, your advice should be also for withdrawal of the statements.

Advocate Rajeev Dhavan for Bhushan: My duty as an officer of the court isn’t synonymous with my duty as a lawyer for my client. I can’t shut my eyes from either of the two. This isn’t an offender who doesn’t acknowledge his duty towards the court. He has contributed so much to this court.

Dhavan reminds Justice Mishra, as a judge in the Calcutta HC, how he let go of Mamata Banerjee after she said all judges were corrupt. Dhavan: If we read the last order that we give him time to submit an unconditional apology, it looks like as if a contemnor is coerced to give an apology so that it gets over. No court can pass an order like this. It was an exercise in coercion.

If Bhushan’s statement is read as a whole, it says he has the highest regard for this institution but he has his opinion about last 4 CJIs and the manner in which this court has gone wrong. We criticise this court when we feel sincere about this institution…Convicting judgment must be recalled. An apology cannot be coerced. This was not scurrilous, this was strong criticism of this court which is shared by several others in this country.

Justice Mishra: If we decide to punish him, what should be the punishment? Dhavan: A general message, not even a reprimand… If you want to bar him from practice, you will have to hear him first. If you want to impose a jail term, my advice would be don’t make Bhushan a martyr. Like what happened after Babri was demolished and Kalyan Singh was convicted of contempt.

Justice Mishra: It was painful to read his reply in justification if his tweets. It was improper.  If someone with a standing of 30 years, like Bhushan, says something, people tend to believe him. They will think whatever he is saying is correct. Had it been someone else, it was easier to ignore but when Bhushan says something, it has some effect.

Whatever we have to say, we have to write in our judgments. There are so many things but do we have to go to the press? I will never do that. That’s the ethics for judges  For how long the system will suffer all this. I am retiring in a few days. Will it be okay if you or others start attacking me? Why to say you can say anything against retired judges?… What is wrong in apologising? Is this word so bad? If someone has made a mistake, what’s wrong in seeking an apology? If you have hurt someone, why can’t you apologise? You go on to the extent of quoting Mahatma Gandhi but you can’t apologise.

‘Bhushan has highest regard for this institution’