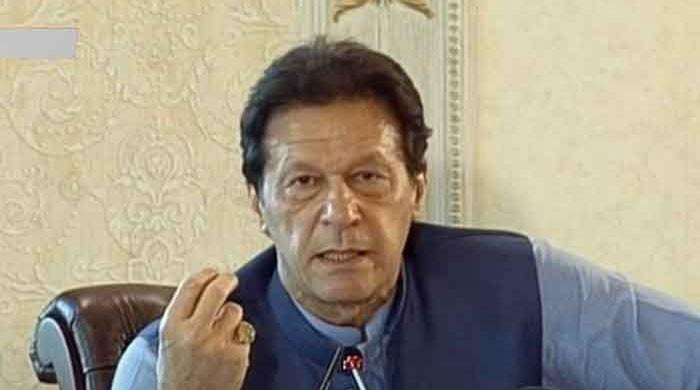 Use all options to ensure Nawaz’s return to Pakistan, says PM Imran

ISLAMABAD: All possible options should be used to ensure former premier and PML-N supremo Nawaz Sharif is brought back from London to Pakistan, Prime Minister Imran Khan said during a meeting held at the Parliament House on Monday.

According to a notification detailing the proceedings from the meeting, in which party leaders, federal ministers, and some spokespersons were present, the prime minister wishes for all methods to be employed to make Nawaz return from London, where he had travelled to for medical treatment.

“There can be no compromise on national interests with the Opposition,” he said, according to an announcement.

The premier was apprised of the progress to date over the legislative matters, with his legal team presenting various different options in this regard.

Last week, Adviser to the Prime Minister on Accountability and Interior, Shahzad Akbar, had said Nawaz had not fulfilled any of the conditions under which he was allowed to leave Pakistan for medical treatment.

As the National Accountability Bureau (NAB) stepped up efforts to continue proceedings in the two cases against the former premier, Akbar said the PML-N supremo was permitted to get medical treatment abroad subject to returning within the stipulated time frame.

Nawaz was also bound to submit his periodical medical reports and updates on his treatment to the court and the government of Punjab, he added, but claimed that the PML-N leader had submitted “no such report”.

The NAB has filed an appeal in the Islamabad High Court for Nawaz’s seven-year imprisonment sentence in the Al Azizia Steel Mills case to be extended to 14 years. Justices Amir Farooq and Mohsin Akhtar Kayani were scheduled to preside over a hearing of the case on September 1.

Moreover, a hearing against the former premier’s acquittal in the Flagship Investments case would also be held that same day, for which another appeal was filed by the anti-graft watchdog.

The adviser had added that the IHC had on August 18 declared Nawaz “an absconder” as his bail had expired. “The federal government has decided to take matters forward with the help of the NAB,” he said.

“This dual standard of accountability cannot take place in Pakistan as common people who hardly get parole return [to serve their sentence] and Nawaz — who has been disqualified for life by the Supreme Court and found guilty in two cases — is enjoying his life in London.”

The premier’s aide said there was no personal vendetta and that it was the government’s objective to uphold the writ of law. “The legal standing of the undertaking that Shehbaz had submitted will also be probed as he is responsible for ensuring Nawaz’s return,” Akbar had added.

“The law is the same everywhere for criminals,” he had said, adding that a “criminal” such as Nawaz could be likened to one that broke out of jail and has run off.