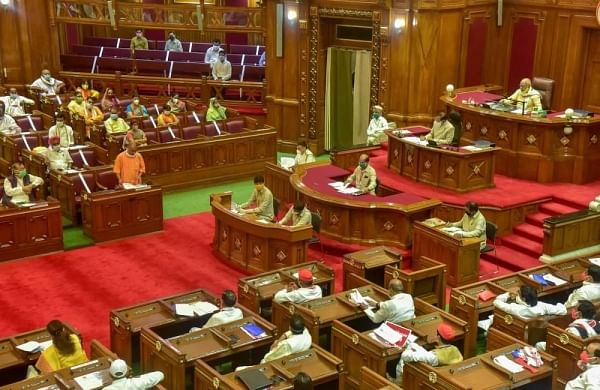 LUCKNOW: The state assembly on Saturday passed several important bills, including the Uttar Pradesh Recovery of Damages to Public and Private Properties Bill, 2020, without any discussion amid the Opposition protest and sloganeering against the government.

Soon after the House met and paid tributes to two of its former members Vivek Singh and Kunwar Bahadur Misra, the Opposition members trooped into the Well of the House, shouting slogans and holding banners to lodge their protests over law and order, the government’s handling of COVID pandemic and flood in the state.

But an undeterred House took up its business agenda, allowing the government to pilot its bills and get them passed within minutes without any discussion.

The other bills which were passed included the Uttar Pradesh Public Health and Epidemic Disease Control Bill, 2020 and Cow-Slaughter Prevention (Amendment) Bill, 2020.

Chief Minister Yogi Adityanath, who was present in the House, gave a statement on the law and order situation and measures being taken to deal with the Corona pandemic and presented statistics, asserting that Uttar Pradesh was much better poised on both the fronts than other states.

He also attacked the Opposition for being ‘bereft’ of issues and ‘trying to mislead’ people.

Later the brief monsoon session, which was scheduled to continue till Monday was adjourned sine die with Parliamentary Affairs Minister Suresh Khanna abruptly moving a proposal for it.