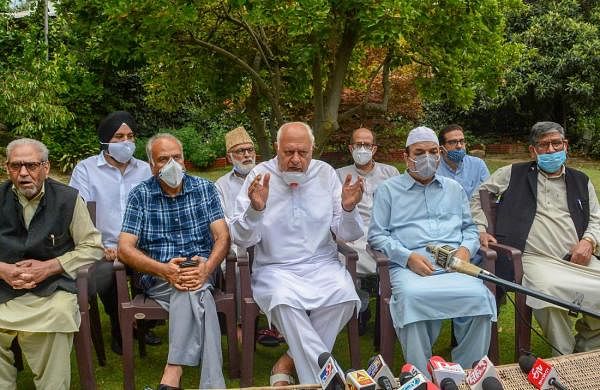 SRINAGAR: In a significant development, six political parties including National Conference, Congress, PDP, Peoples Conference, CPM and Awami National Conference (ANC) asserted that they are bound by August 4, 2019 “Gupkar Declaration” and would strive for the restoration of Articles 370 & 35A, the constitution of J&K and statehood.

“We all reiterate that we are bound, wholly, by the contents of the August 4, 2019 ‘Gupkar Declaration’ and will unwaveringly adhere to it. We are committed to strive for the restoration of Articles 370 and 35A, the Constitution of J&K and the restoration of the State. Any division of the State is unacceptable to us. We unanimously reiterate that there can be ‘nothing about us without us’,” stated a joint statement of political leaders released by National Conference on Saturday.

The joint statement said the unfortunate events of August 5 2019 when J&K’s special status was scrapped and state split into two Union Territories have unrecognizably changed the relationship between J&K and New Delhi.

“In a spitefully shortsighted and unconstitutional move, Articles 370 and 35A were abrogated and the State was bifurcated and relegated to the status of two Union Territories and its Constitution tried to be made unenforceable,” it said.

Terming the August 5 decision as “grossly unconstitutional” and a challenge to the basic identity of the people of J&K, the joint statement said these measures attempt to redefine who we are. “These changes were accompanied by repressive measures meant to silence people and coerce them into submission, and continue unabated.”

Describing the present situation in J&K as “testing times and times of pain for people”, the joint statement said, “We reiterate our commitment to collectively fight to restore J&K’s special status as guaranteed by Indian Constitution and commitments made from time to time”.

“We will tirelessly struggle to get back the special status and restore the Constitutional guarantees forcibly taken away, against our will. We want to assure the people that all our political activities will be subservient to the sacred goal of reverting to the status of J&K as it existed on 4th August 2019,” added the joint statement.