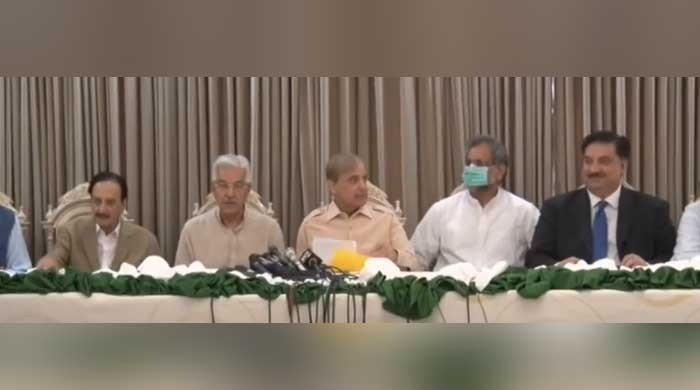 PML-N takes PTI to task over its two-years performance

The PML-N on Monday took the PTI-led government to task over its performance in the last two years, saying it was the “worst in the history”.

In a press conference here in the provincial capital, PML-N president Shehbaz Sharif expressed his condolences over the passing of National Party President Mir Hasil Khan Bizenjo, saying the late senator always stood strong with democracy and the Constitution of Pakistan.

Referring to Prime Minister Imran Khan’s administration, he said it was a government that is the “worst in the history, incompetent, and one that neither knows governance nor is concerned about the problems the public faces”.

“In two years, the [rising] inflation has brought people to the brink of disaster. First, sugar was exported and the gains from depreciation in the rupee were availed. Farmers were punished and the exporters made billions.

“The price of sugar has gone above Rs100 [a kilo]. Now, sugar is being imported!”

‘Nothing but misery and hardship’

“For the first time in history, there was a shortage of wheat even before the harvest season ended. A member of the government asked on the floor of the House where the wheat had gone!

Shehbaz said oil prices were jacked up in one shocking move. “Electricity prices skyrocketed but the circular debt is still out of control,” he added.

“The [government’s] worst incompetence and incompetence has led to load-shedding of electricity as well. Projects using oil should have been shut down but there was a conflict of interest,” he stated.

He noted how exports did not rise despite the rupee depreciating 40%.

“For the second time in the country’s history, GDP growth was negative,” he mentioned, saying the first one was in 1952. “There is nothing but misery and hardship under the Tabdeeli Sarkaar!”

‘No corruption was ever found’

The PML-N president said “unparalleled propaganda was spread against” his party. “There was historic development work in Pakistan under Nawaz Sharif,” he noted.

“In Pakistan’s 72-year history, there is no parallel to these projects. Those traveling on the Sukkur-Islamabad motorway said it was a better journey than on an airplane.

“During the Nawaz Sharif era, four LNG projects worth 5,000 megawatts (MW) were implemented and per-unit cost does not exceed Rs12-13. In Nawaz Sharif’s third term, no corruption took place in any of the projects.

“To date, not a single penny’s worth of corruption has been proven,” he said, adding that PM Imran and his followers “turned upside down but no corruption was ever found”.

The PML-N leader said his party was not against impartial accountability. The entire country, he added, watched the spectacle of pinning the Opposition against the wall.

“Despite being cornered, we extended our hand for cooperation but they rejected it,” he explained.

‘People are longing for old Pakistan’

Those in the Cabinet were not saints either and no one questioned them, he said, adding that the government had stopped giving free medicines to cancer patients in Punjab.

“People are longing for the old Pakistan today because this tabdeeli [change] has their lives,” he added. “Was that Pakistan better or is this Pakistan better?”

Shehbaz underlined that even before the coronavirus pandemic hit the country, the incumbent government’s “incompetence and incapability” had left millions without jobs and yet more people would soon be unemployed.

“This nexus has frightened the investors,” he said. “Despite the unprecedented support this elected government has, every sector is on a downward trend.

“This is what they have done to the country. Earlier, they would accuse the prime minister of being a thief whenever electricity became expensive,” Shehbaz added. “Where are all those comments now?

“Telling people not to worry or be concerned — ‘ghabrao nahi’ — does not get them roti [bread]. They claim they will not give NRO but would that give people roti?

“These people used to say earlier they would rather die than approach the IMF [International Monetary Fund]!”

Former PM Shahid Khaqan Abbasi spoke of how the incumbent government was “ignorant and forced to lie” to the nation.

“The electricity bills for domestic consumers have been increased 30%,” Abbasi said, adding that ministers had explained earlier that power tariffs had been bumped up to control the circular debt.

The power plants owned by the ministers run on diesel and provide costlier electricity, he added, noting that the government’s incompetence in the energy sector had caused a loss of thousands of billions of rupees.

Former foreign minister Khawaja Asif, on the other hand, spoke of the Kashmir issue, saying the massacre taking place in the Muslim-majority region was “the biggest failure of foreign policy”.

“We have fought wars with India over Kashmir but they [the government] has betrayed the blood of Kashmiris,” he underlined.

Asif also touched upon Pakistan’s relations with other nations, saying the issue in Malaysia angered both Kuala Lumpur and Saudi Arabia. “Millions of [Pakistani] people were working in these two countries,” he said, adding that the conflict “put them all in danger”.

The PTI-led government “spoiled relations with China”, with which the China-Pakistan Economic Corridor (CPEC) was underway, he said. “What benefit did we gain out of relations with the United States?”

“Whatever is happening on the foreign policy front is in front of everyone. The comments aimed at Saudi Arabia were inappropriate,” he added.

Asif, the former FM, noted how the Organisation of Islamic Cooperation (OIC) was made inactive. He said Pakistan could have improved relations with Iran and Afghanistan but the PTI government did not do so.

“All the foreign policy successes Pakistan achieved [in the PML-N tenure] have been ruined,” he lamented. “Despite the Yemen war issue, we did not allow relations with Saudi Arabia to deteriorate.

“They are not ashamed, they are defending the historical failures,” Asif added. “They lose billions and list down gain worth pennies.”