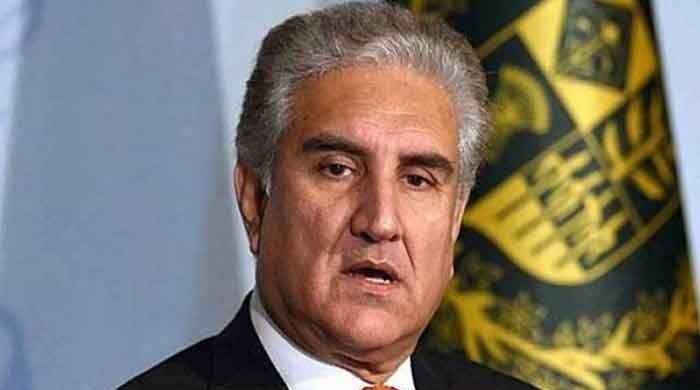 ISLAMABAD: Foreign Minister Shah Mahmood Qureshi on Monday said Pakistan and Saudia Arabia are on the same page regarding Israel.

The foreign minister also rejected the speculations that the ties betwee the two countries have deteriorated over the past few weeks. “The kingdom has neither asked Islamabad to return its loan nor has it suspended oil supply to Pakistan, Qureshi said.

“Pakistan and Saudi Arabia have the same stance on [normalising relations with] Israel,” he said, adding that Pakistan’s stance has not wavered.

He said that Saudi Arabia has also not changed its stance on occupied Kashmir.

The foreign minister spoke about Chinese President Xi Jinping’s upcoming visit to Pakistan, describing it as one of “utmost importance”, adding that China is also supporting the peace process in Afghanistan.

The foreign minister said that a discussion will be held with the Taliban on Tuesday which will focus on the intra-Afghan peace discussions.

Referring to the possible instability in Afghanistan, the foreign minister said that “there is a group in Afghanistan that is causing a rift [to develop and hinder peace talks]”.

Speaking on Pakistan-China ties, the foreign minister said that Islamabad and Beijing will collectively act to safeguard integrity and peace in the region.

Qureshi said that the China-Pakistan Economic Corridor will benefit the entire region and despite India’s statements, the project will go ahead.

“India can keep on saying whatever it wants to say. The project will continue,” he said.

The foreign minister revealed that during his recent visit to China, the issue of Indian occupied Kashmir also came up, where Beijing dismissed Indian claims over the valley.

FM Qureshi said that China had rejected India’s August 5 move and termed it ‘unilateral’, thanking Beijing for its clear stance on the Kashmir issue.

Speaking on Indian atrocities, the minister said that India has failed to project the impression that things are improving in occupied Kashmir.

“The International Crisis Group called the situation in the valley a resistance movement, and has demanded that India rescind its August 5 decision,” he said.

FM Qureshi said that Prime Minister Imran Khan raised the matter of IoK before the United Nations, adding that India is running away from the matter and lying to the global community.

The Kashmiri struggle of the right to self-determination which had started since 1989 has now gained new political momentum and the joint-declaration was the first testimony to this fact, he said.

Qureshi said that New Delhi’s August 5 move had made matters worse for the people of the occupied territory. He said that anger and frustration are on the rise in the region due to restrictions and a communications blackout imposed by authorities.

The foreign minister said that India’s move had crippled occupied Kashmir’s economy, wondering how investment could thrive with so many armed personnel holding the local population hostage.