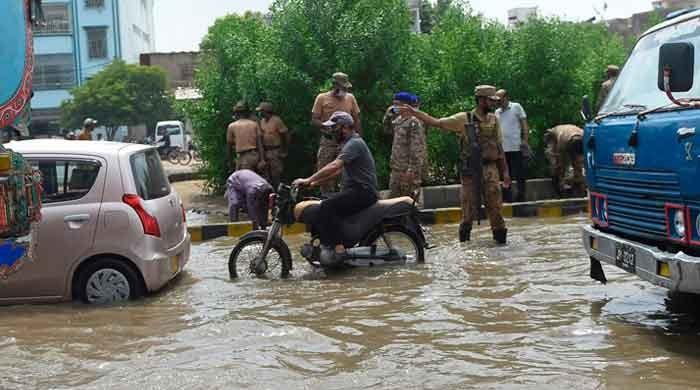 Roads were inundated with low lying areas of the city flooded with rainwater after another strong spell of monsoon hit the metropolis.

According to reports, FB Area’s block nine has been facing a power outage from the past five hours causing an outcry among the residents.

Meanwhile, the director Meteorological Department said that a system of clouds has started moving towards the port city from the east.

The rain bearing system is currently looming over Karachi’s southeast district, he added.

Moreover, a tree had fallen near the Ayesha Bawani academy on Shahrah-e-Faisal causing a disruption in traffic.

Landhi received the most rainfall, 18mm, followed by 17mm in Gulshan-e-Hadeed, 16.5mm in Surjani Town, 12mm in Saddar, 9.6mm in North Karachi, 7mm in Jinnah Terminal, 8mm in Keamari, 5mm in Pakistan Air Force Faisal Base, 3mm in Mosamiat, and 1mm in Nazimabad.

Giving an overview of the rain recorded throughout August, the MeT said that an average of 61mm rain was recorded across Karachi.

According to Director Meteorological Department Abdul Qayyum Bhutto, the city might receive 100mm of rain today.

The Met department director said that various areas in the city will either receive heavy or moderate rain showers.

Bhutto said that the monsoon spell can last with intermittent rain showers until Wednesday, adding that heavy rains can cause urban flooding.

The fifth rain spell in Karachi has brought with it unexpectedly heavier showers than before that have caused severe urban flooding in low-lying areas with nullahs overflowing despite the recent cleanup operations.

In light of rains, KE, the city’s sole power provider, has warned citizens to stay away from broken wires, electricity poles, and PMTs.

“Unsafe use of electrical appliances in rain and accumulated water can lead to accidents,” KE added.

KE said that its teams were working to restore electricity in the affected areas, adding that a temporary shut down took place in some areas where water had accumulated.

The power supplier claimed that it had restored power in Gulshan-e-Iqbal, Gulistan-e-Jauhar, North Karachi, Landhi, Saddar, among other areas.

“Work is underway in Surjani, Korangi, and other areas to restore power,” it added.

Yesterday, at least five people were killed in the metropolis in rain-related incidents, rescue services officials said. Two teenagers died when they were hit by lightning in Memon Goth, while two others were electrocuted and one teenager was swept away by the ferocious currents of the surging Lyari River.