First Lady Melania Trump said it has been her “greatest honor to serve” this country as first lady on the second day of the Republican National Convention.

The first lady spoke about her childhood growing up in Slovenia and how it became her goal to move to the United States and become an American citizen during her speech Tuesday from the newly renovated Rose Garden at the White House. 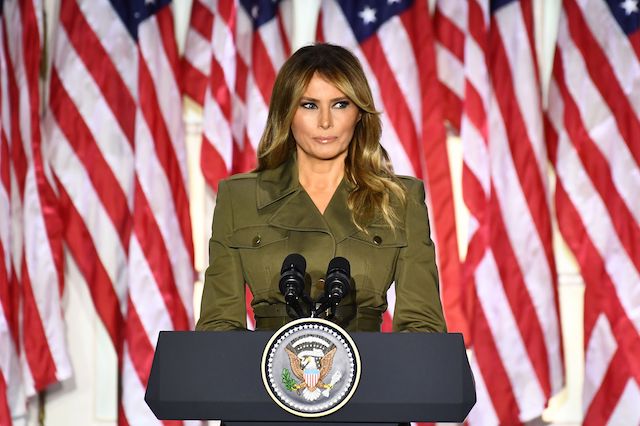 “I arrived in the United States when I was 26 years old, living and working in the land of opportunity was a dream come true but I wanted more,” Melania shared. “I wanted to be a citizen. After 10 years of work, I studied for the test in 2000 six and became an American citizen.” (RELATED: Ivanka Turns Heads In Gorgeous Yellow Plaid Skirt Suit)

“It is still one of the proudest moments in my life, because with hard work and determination, I was able to achieve my own American dream,” she added. As an immigrant and a very independent woman, I understand what a privilege it is to live here and to enjoy the freedoms and opportunities that we have. As first lady, I have been fortunate to see the American dream come true over and over again.”

Trump then called out the “false media headlines” and “attacks from the other side.”

“No matter the amount of negative or false media headlines or attacks from the other side, Donald Trump has not and will not stop fighting for you,” the first lady explained. “He loves this country and he knows how to get things done. We have learned over the past five years he is not a traditional politician. He doesn’t just speak words. He demands action and he gets results.”

“The future of our country has always been very important to him,” she added. “And it is something I’ve always admired.

At one point, she called on people to take a pause and stop the violence.

“Like all of you, I have reflected on the racial unrest in our country it is a harsh reality that we are not proud of parts of our history,” Melania shared. “I encourage people to focus on our future while still learning from our past. We must remember that today we are all one community, comprised of many races, religions, and ethnicities. Our diverse and storied history is what makes our country strong , and yet, we still have so much to learn from one another.” (RELATED: Melania Stuns In Pale-Pink Dress At Reception During UN General Assembly [PHOTOS])

“With that in mind, I’d like to call on the citizens of this country to take a moment, pause, and look at things from all perspectives,” she added. “I urge people to come together in a civil manner so we can work and live up to our standard American ideals. I also ask people to stop the violence and looting being done in the name of justice. And never make assumptions based on the color of a person’s skin.”

FLOTUS continued, “Instead of tearing things down, let’s reflect on our mistakes. Be proud of our evolution and look to our way forward. Every day, let us remember that we are one nation under God and we need to cherish one another.”