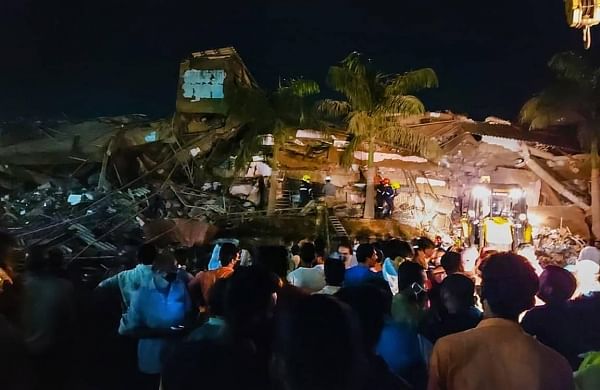 MUMBAI: NDRF personnel had a bitter-sweet moment at Maharashtra’s Raigad district on Tuesday when they rescued a four-year-old boy alive from the rubble of a five-storey building in which the toll rose to 13.
Though Mohammed Nadim Bangi was found nearly 18 hours hour after the building collapsed in Mahad town, around 170 km from Mumbai, his mother and two sisters were not lucky.

Their bodies were recovered from the spot soon after the boy was rescued from a space between two broken pillars, rescuers said.

The boy’s father works in Dubai and reached Mahad on Tuesday afternoon, the police said.

The NDRF, police, locals, and dog squads were working relentlessly to rescue the people trapped under the debris. Thirteen heavy duty excavators and other vehicles were engaged in removing debris at the collapse site.

Probe, meanwhile, revealed that the Tareq Garden building was built only 10 years ago. Police registered a case against five people, including the architect and the builder of the building.

Minister of relief and rehabilitation Vijay Wadettiwar announced Rs 4 lakh in  ex gratia to the families of  the deceased families while those injured will get Rs 1.50 lakh each.

Wadettiwar said the government will take strict action against the developer.

“We have asked the district collector to lodge the complaint against the developer,” Wadettiwar said.

Congress leader Rahul Gandhi appealed to the Maharashtra government for  providing all assistance to the people injured or trapped in the building collapse in Raigad at the earliest.