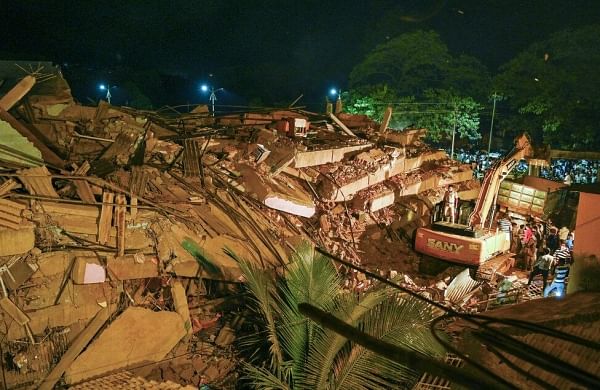 MUMBAI: With the recovery of two more bodies early on Wednesday, the death toll in the building collapse incident in Maharashtra’s Raigad district mounted to 15, a police official said.

The authorities called off the rescue operation around 11.30 am on Wednesday as all the 17 missing persons- 15 deceased and two rescued, were traced, the official said.

At least nine others, who suffered injuries in the incident, are undergoing treatment in a hospital, he said.

The five-storey building – Tareq Garden- in Mahad town, around 170 kms from Mumbai, collapsed on Monday evening.

“The bodies of a 70-year-old man and a 60-year-old woman were recovered in the early hours of Wednesday. This took the death toll in the incident to 15,” Superintendent of Police, Raigad, Anil Paraskar told PTI.

The teams comprising the personnel of the National Disaster Response Force (NDRF) and police, local disaster management team, trekkers and local residents, were engaged in the rescue operation.

“As all the 17 persons who had gone missing after the incident, including 15 victims, were traced, the rescue operation was called off,” Paraskar said.

Till late Tuesday night, bodies of 13 victims had been recovered.

On Tuesday, a four-year-old boy was pulled out alive from under the rubble 19 hours after the incident.

A 60-year- old woman was also rescued 26 hours after the building collapse.

“Both of them are safe and undergoing treatment at hospital,” the official said.

Police had on Tuesday registered an offence against five persons, including the builder and architect of Tareq Garden in connection with the incident.

A four-year-old boy was on Tuesday pulled out from the rubble, police said.

However, it was not all joy as leass than half an hour later, the lifeless body of his 30-year-old mother was also recovered from the debris.

The boy, Mohammed Nadim Bangi, looking bewildered after his night-long ordeal amid the rubble, was taken by NDRF personnel to a waiting ambulance.

A video shared by NDRF showed the rescuers taking out the boy from under the damaged structure of the building on a stretcher amid claps by onlookers.

The body of NaushinNadim Bangi, the child’s mother, was recovered by NDRF personnel 20 minutes later.

As the operation was underway, the rescue team spotted the child under the debris, after which it started clearing the structure with help of gas cutter and other machines.

Local residents, who were watching the operation with baited breath, cheered with joy after the boy was rescued.

As the Ganesh festival is on, the locals chanted “Ganpati Bappa Morya” after the child was lifted onto a stretcher.

The rescued child has some minor injuries on his body, the official said.

The child’s aunt said she was happy after seeing him safe, adding she is praying that everybody who lived in the building is safe.

A 60-year-old woman was rescued on Tuesday evening 26 hours after the mishap, an official said.

Mehrunnisa Abdul Hamid Kazi was trapped under the rubble of the five-storey building which collapsed on Monday evening.

Kazi lived on the fifth floor of the building, the official said.

After noticing some movement under a portion of the debris, personnel of the National Disaster Response Force succeeded in pulling her out by 9.35 pm, and sent her to hospital.