NEW DELHI:  The links between Pulwama attack and Al-Qaeda have surfaced for the first time in the charge sheet filed by NIA in the deadliest attack on security forces in the last one decade in Jammu and Kashmir.

The NIA, which filed its charge sheet in the February 14 Pulwama attack case on Tuesday, said that Jaish-e-Mohammed is sending its cadres to the terrorist training camps of Al Qaeda, Taliban, JeM and Haqqani-JeM in Afghanistan for training in explosives and other terrorist tactics. 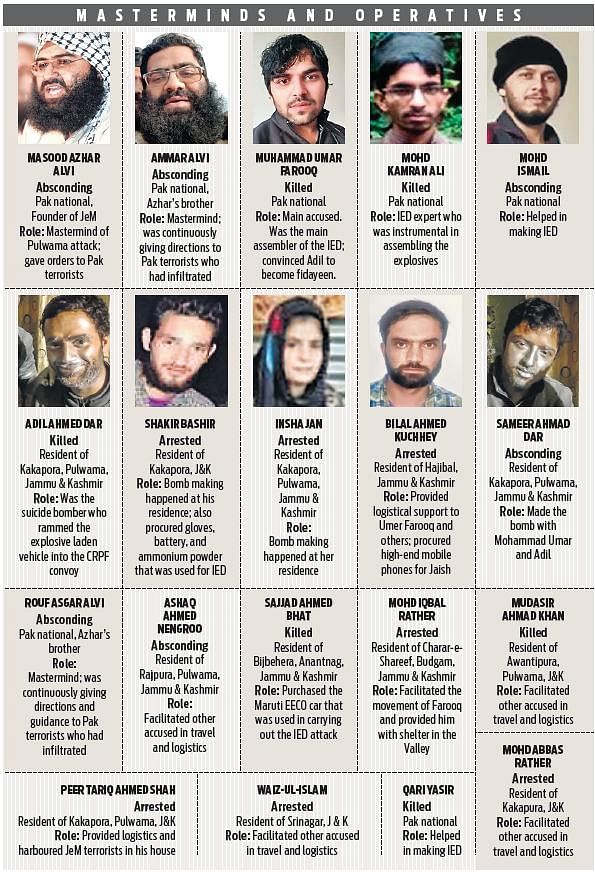 JeM chief Maulana Mashood Azhar’s nephew Mohammad Umar Farooq, who is described as the main accused of the dastardly attack, was in Afghanistan for explosive training in 2016-17, as per the NIA.

Farooq, who was the main assembler of the IED used in the attack, with his know-how made two IEDs in a very few days for the Pulwama attack.

The plan execution began with the infiltration of Farooq who entered India through International Border at Jammu-Samba sector in April 2018 and took over as Jaish commander of Pulwama.

“In the first week of February 2019, Mohd. Umar Farooq, Sameer Ahmad Dar, Adil Ahmad Dar and Shakir Bashir made the IED using RDX, Calcium-Ammonium Nitrate, Gelatin Sticks and Aluminium Powder and assembled it in two containers, one weighing around 160 kg and the second one weighing around 40 kg. The two IED containers were fitted in the car that was used in the attack,” the NIA said.

While seven accused are in NIA custody, seven are dead, killed in encounters with the security forces and five are absconding.