GOP senators are set to introduce legislation Thursday that would enact federal penalties for criminals who purposefully target law enforcement officers with violence.

The Protect and Serve Act would make it a “federal crime to knowingly cause, or attempt to cause, serious bodily injury to a law enforcement officer,” according to an advance copy of the press release obtained by the Daily Caller.

Offenders face up to 10 years imprisonment, but could receive life if the offense includes attempted murder, kidnapping, attempted kidnapping or if a death results from the act. 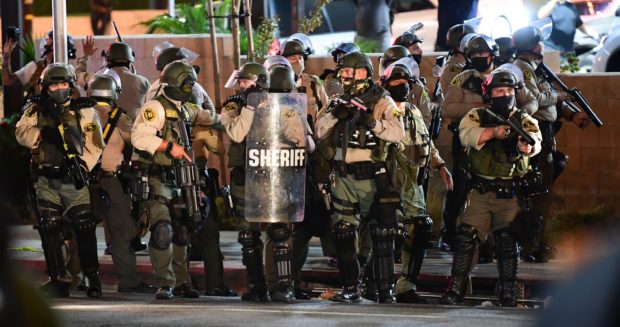 Los Angeles County sheriff’s deputies ready to disperse a crowd of demonstrators gathered to protest again in the wake of Dijon Kizzee’s killing, outside the South LA sheriff’s station on September 8, 2020 in Los Angeles, California. (Photo by FREDERIC J. BROWN/AFP via Getty Images)

This law would apply to federal, state, and local law enforcement officers “in circumstances where the federal government can establish jurisdiction over the case,” the press release read.

Republican Florida Rep. John Rutherford and Democratic Florida Rep. Val Demings introduced the bill in the House of Representatives last year. It passed the House in 2018 382-35 with broad bipartisan support, but was not introduced in the Senate.

The renewed impetus behind the measure comes as violence against law enforcement has risen across the United States, with 37 officers killed in 2020 alone. Riots and demonstrations sparked by the death of George Floyd in police custody have led in to several shootings and violent incidents against police, and over the weekend, a pair of Los Angeles deputies were ambushed, shot and nearly killed.

“Law enforcement officers in North Carolina and across the country put their lives on the line every day to keep our communities safe, and the dramatic rise in senseless acts of violence against LEOs causing injury or loss of life is simply unacceptable,” Tillis said in a statement. “I am committed to supporting the men and women who swear an oath to protect us, and that is why I am proud to introduce this legislation that would create federal penalties for those who target law enforcement officers.” (RELATED: Candace Owens: Violence Against Police ‘A Natural Progression Of The Left’s Increasingly Deranged Rhetoric’)

“It is disgusting to see our law enforcement officers become targets of violence, harassment and abuse,” Scott added. “Law enforcement officers are not the enemy – these selfless individuals are true heroes who put their lives on the line every day to protect our communities. We can’t accept these acts of violence, and I’m proud to join my colleagues in this legislation to hold individuals accountable for targeting our men and women in uniform.”

Senators are set to unveil the legislation Thursday at 10:00 a.m.