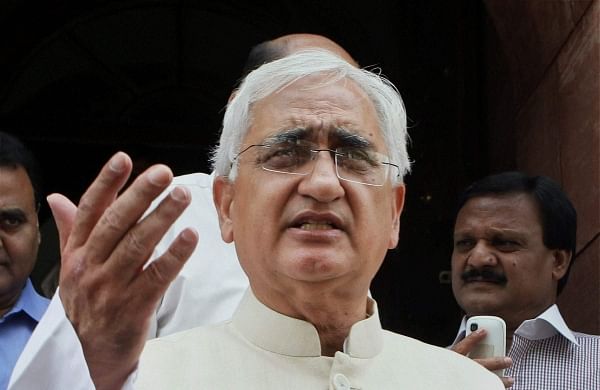 NEW DELHI: Amid calls from within the Congress to hold polls for presidency, senior leader Salman Khurshid on Sunday said the party should give consensus a chance instead of elections which create divisiveness.

Khurshid also said Rahul Gandhi enjoys the “full support” and “endorsement” of party leaders and workers, and it does not matter whether he wears the label of a president or not.

“I have said very clearly that the Gandhis are leaders of the Congress. Nobody can deny this, even the opposition cannot deny this. I am quite happy having a leader, I don’t worry about whether or not we have a president, we have a leader (in Rahul Gandhi) and that is comforting for me,” the former Union minister told PTI in an interview.

His remarks assume significance as they come just ahead of the meeting of the Congress Working Committee (CWC), the party’s highest decision making body, which is likely to deliberate on the leadership issue that is in the spotlight with Sonia Gandhi completing a year as interim chief.

Also, 23 Congress leaders, including some ex-ministers have written to party president Sonia Gandhi for the overhaul of the organisational structure.

Asked about the section of party leaders calling for elections to the CWC and presidency, Khurshid hit out at those asking for internal polls, saying why are people so anxious to make these demands in the Congress when they are not made in any other party.

“Elections are important, but the historical context in which elections have to be held, circumstances, have to be taken into account. Consensus has been an important part of the political process in the Congress,” he said.

Giving up consensus and opting for elections, without reflecting upon the implications and consequences might be running into “unknown, unchartered territory”, he said.

Khurshid also said that such issues should be discussed within the party and not outside it.

His comments come days after Shashi Tharoor had said that he has been advocating elections to the CWC and for the post of the president as it would certainly have a number of beneficial outcomes for the party.

Congress leader Sandeep Dikshit had also said recently that it is “high time” that the Congress appoints a full-time president by “selection or election”.

Asked if consensus was the way forward instead of internal polls, Khurshid said, “My instinct says this. My understanding of the Congress says that consensus is extremely important.”

“People react to that by saying that you are being anti-democratic. I don’t know if consensus is in some way an undemocratic thing to happen. It should be a genuine consensus. Of course it should not be a forced consensus. I think we should give consensus a chance,” he said.

On whether polls can lead to divisiveness in the party, Khurshid said elections do divide.

Elections, in the right spirit, should not divide, but the ground reality is that elections do divide, he said.

“So, let us just hope we gradually mature to a stage where elections will not divide,” he said.

Asked if Rahul Gandhi should come back as party chief, Khurshid said it was up to him to make his decision and leaders should allow him to take a call.

“When you give someone your allegiance as a leader then you have to listen to the leader and whatever the leader wants to do. There is a view in a large number of people that he should not stay away from presidentship of the party,” he said.

Noting that Gandhi has his own reasons to keep himself away from the presidentship, Khurshid said party leaders should respect his decision and not in any way create a situation that becomes difficult for him.