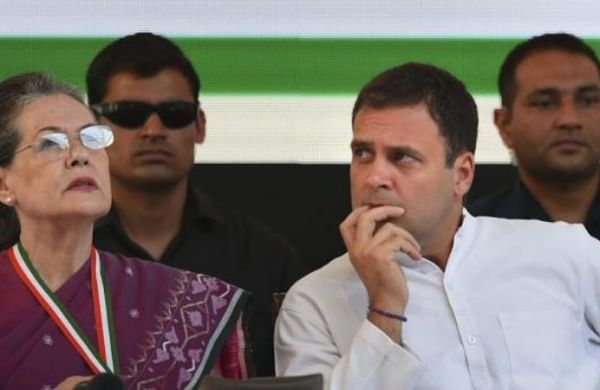 NEW DELHI:  Even though none of the issues raised by 23 senior party leaders in their letter to Congress boss Sonia Gandhi was discussed at the Congress Working Committee (CWC) meeting on Monday, their concerns will be addressed, sources said.

The All India Congress Committee (AICC) could soon see organisational changes with a reshuffle planned in many states. Party sources said the restructuring of state units has already started while a thorough revamp of the AICC is on the cards.

The coming weeks could see reshuffle of general secretaries and state in-charges.

According to sources, Jharkhand in-charge R P N Singh, Punjab in-charge Asha Kumari, and Chhattisgarh in-charge P L Punia will either be moved to other states or relieved of their responsibilities.

A few fresh faces are also likely to be inducted in the top team while young leaders may be given organisational posts.

The changes, however, are planned in a phased manner. Meanwhile, members of the group who sent the letter on Tuesday said they can’t be termed ‘dissenters’ as their intention was only to strengthen the party.

Speaking to TNIE, former Karnataka chief minister M Veerappa Moily said, the aim was to ensure that the Congress is battle-ready to take on the BJP in the 2024 general elections and not to question the party leadership. Moily, who was among the leaders who signed the letter, said they all have absolute faith in Sonia Gandhi.

CWC member Anand Sharma said the letter was written with the best interest of the party in mind.

“India needs a strong opposition to confront the BJP. Suggestions for the party’s renewal made in sincerity are not dissent,” he tweeted. Rajya Sabha MP Vivek Tankha, one of the signatories, agreed. “The letter was a parchment of action to strengthen the party,” he said. Another leader claimed nobody in the CWC meeting questioned the content of the letter, only its timing.

Sonia to get functional team

Sonia Gandhi will get a functional team, comprising both old and young hands to help her overhaul the party.

We are not dissenters, did not challenge leadership: Congress’ ‘Group of 23’ .

A day after being dissed at a stormy Congress Working Committee meeting over their letter seeking urgent organisational reforms, several members of the ‘group of 23’ said on Tuesday they are “not dissenters” but “proponents of revival”.

Many of them also backed Sonia Gandhi remaining at the helm.

The letter was not a challenge to the leadership but a parchment of action to strengthen the party, Congress MP Vivek Tankha said.

Former Union minister Mukul Wasnik said those who saw the letter as an “offence” will also soon realise that the issues raised are worth consideration.

Senior Congress leader M Veerappa Moily said it is an “admitted fact” that the organisation is not in a position to take forward ‘the Congress philosophy and protect democracy’.

He also asserted that Sonia Gandhi’s leadership is always required.

The former union minister further said the intention of the letter was to keep the party ready for the 2024 Lok Sabha polls as also for assembly and local bodies elections in the country.

Senior Congress leader Kapil Sibal, another signatory to the letter, posted a cryptic tweet, saying: “It’s not about a post. It’s about my country which matters most.”

Tankha took to Twitter to address the controversy surrounding their letter which led to a high drama at the CWC meet where many leaders, including former party chief Rahul Gandhi, lashed out at the letter writers.

The CWC unanimously urged Sonia Gandhi to continue as its interim chief till an AICC session can be convened to start the process of electing a full-time president and authorised her to effect necessary organisational changes to deal with the challenges facing the party.

Sonia Gandhi was made interim chief a year ago after Rahul Gandhi resigned from the position taking moral responsibility for the party’s disastrous performance in the Lok Sabha elections.

“Friends, we are not dissenters but proponents of revival. The letter was not a challenge to leadership but a parchment of action to strengthen the party. Universally, truth is best defence whether it be Court or Public Affairs. History acknowledges the brave & not the timid (sic),” Tankha said in a tweet.

Replying to Tankha, Wasnik tweeted, “Well said. Sooner than later those who saw the letter as an offence will also realise that the issues raised are worth consideration.”

Senior party leader Anand Sharma also tagged Tankha’s tweet and said, “The letter was written with the best interest of the party in our hearts and conveying shared concerns over the present environment in the country and sustained assault on the foundational values of the constitution.”

Another Congress leader, belonging to the group which wrote the letter, said they were satisfied with the outcome of the CWC meet.

Some leaders who signed the letter were present at the CWC meeting and agreed to the proposals, said the leader, who wished not to be named.

“We have never expressed any doubts on the leadership of Sonia Gandhi and Rahul Gandhi and whatever decisions Sonia ji will take, will be acceptable to us,” the leader said.

“We are working to strengthen the party, not working against anyone,” the leader said.

Stating that the Gandhi family is always known for patriotism and sacrifice, Moily said Sonia Gandhi’s leadership is always required and her consent to continue as president is the “most welcome step”.

He said Sonia Gandhi is a “motherly figure” for the Congress and always inspired the rank and file of the party.

Many members from the ‘group of 23’ refused to comment on the matter officially, while some of them referred to the CWC resolution for the inner-party issues being raised only within the party and not in media or public fora “in the interest of propriety and discipline”.

After the seven-hour meeting of the party’s top decision-making body, the CWC made it clear that no one will be permitted to undermine or weaken the party and its leadership.

Some senior Congress leaders, including Sibal, Wasnik, Shashi Tharoor and Manish Tewari, had met at their senior colleague Ghulam Nabi Azad’s house here on Monday evening soon after the CWC debated their letter.

Having a “full time, active and visible” leadership, devolution of powers to state units and revamping the CWC in line with the party constitution are some of the key suggestions made by the 23 senior Congress leaders in the letter to Sonia Gandhi to revive the organisation.

Sibal, who is not a part of the CWC, had hit out at Rahul Gandhi on Twitter on Monday for a purported remark slamming the letter writers.

He withdrew his tweet a little later after being “informed by Rahul Gandhi personally that he never said what was attributed to him”.

The Congress also officially denied that Rahul Gandhi had accused any party leader of “colluding with the BJP”.