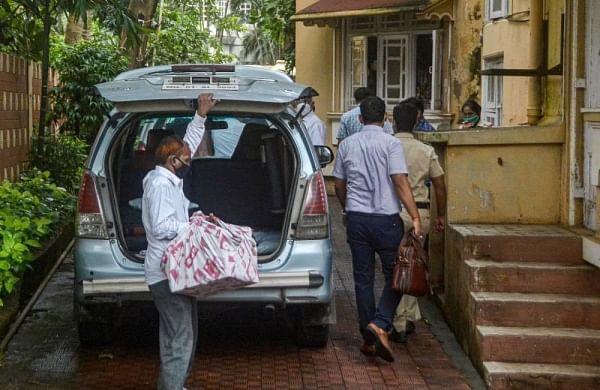 MUMBAI: A team of the Central Bureau of Investigation (CBI) visited actor Sushant Singh Rajput’s house in suburban Bandra on Saturday to reconstruct the sequence of events before he was found dead on June 14.

It was Neeraj and Pithani who had found Rajput hanging in his room.

Forensic science experts were also part of the CBI team which wanted to reconstruct the sequence of events on June 14, an official said.

As CBI sleuths and experts of the Central Forensic Science Laboratory arrived at Mont Blanc Apartments at 2.30 pm, a huge crowd of media persons and onlookers gathered at the spot.

The probe team was inside the flat even after three hours, the official said.

The team first went to the building’s terrace and then entered the flat.

From outside, they were seen clicking pictures of the bedroom and shooting video.

The CBI team was investigating whether suicide was possible at the spot, said the official.

A woman, who said she lived in the building, told reporters that there had been no party at Sushant’s residence on June 13, the day before his death, as claimed by a section of media.

On Friday, the CBI officials had recorded the statements of Pithani and Neeraj.

Maharashtra: Neeraj and Sidharth Pithani along with the CBI team outside the residence of #SushantSinghRajput in Mumbai. pic.twitter.com/SbiGOWzpKV

Meanwhile, another CBI team visited the state-run Cooper Hospital in the city, where autopsy had been performed on Rajput’s body, on Saturday.

They met the dean of the hospital and will also meet the doctors who carried out the autopsy, the official said.

A third CBI team visited the Bandra police station to meet officials of the Mumbai police who were investigating Rajput’s alleged suicide earlier.

CBI also officials recorded the statement of Pithani at the IAF guest house in Santa Cruz, where the visiting members of the central agency are staying.

On Friday, they had also interrogated cook Neeraj at the guest house, he added.

It was the CBI team’s second visit to the Bandra police station since it began the probe in Mumbai on Friday.

The Supreme Court on Wednesday upheld the transfer of an FIR, lodged by Rajput’s father at Patna against actor Rhea Chakraborty and others for allegedly abetting his suicide, to the CBI.

Following the apex court’s nod, the investigating agency has started its probe into the death of the late 34- year-old actor.

Accordingly, a special investigation team of the CBI, comprising officers, other personnel and forensic experts, landed in Mumbai on Thursday evening to take over the probe into the high-profile case.