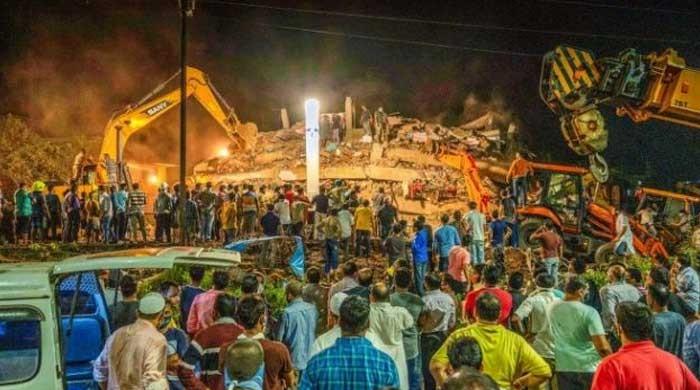 MUMBAI: At least 70 people were feared trapped after a five-storey building collapsed late Monday in western India, police said, with a local legislator warning that the number could be as high as 200.

The structure comprised 47 flats, police in the town of Mahad — 120 kilometres (75 miles) south of Mumbai — said in a statement.

The cause of the accident was not immediately clear but building collapses are common during India’s June-September monsoon, with old and rickety structures buckling under the weight of non-stop rain.

“Fifteen injured people have been rescued and taken to hospital,” Mahad police said.

Three rescue teams, armed with specialised equipment and sniffer dogs, had been deployed to the scene of the accident, a statement from India’s National Disaster Response Force said, with Home Minister Amit Shah tweeting that he was “praying for everyone’s safety”.

Local residents and police combed through tin sheets, metal rods and other wreckage in a desperate search for survivors as ambulances ferried victims to nearby hospitals.

Mahad legislator Bharat Gogawale told the local TV9 Marathi channel that early estimates seemed to suggest that “over 200 people are stuck inside”.

“Our primary goal is to rescue as many people as possible who are trapped under the debris”.

“We cannot yet ascertain the reason for the collapse”, he added

Local politician Manik Motiram Jagtap told the channel that the structure was 10 years old and built on “weak” foundations.

“It fell like a house of cards,” Jagtap said.

“It is a scary situation.”

As night fell, emergency workers used cranes to try and remove the rubble as relatives anxiously waited for news of their loved ones.

The office of Uddhav Thackeray, chief minister of Maharashtra state, where Mahad is located, said on Twitter that he had been in touch with local representatives in the area.

“He has assured them that all possible support will be extended for speedy rescue and relief works,” the tweet said.

The death toll from monsoon-related disasters this year has topped 1,200, including more than 800 lives lost in India alone.

The accident brings yet more bad news for Maharashtra, which has already been hit hard by the coronavirus crisis, with the state accounting for over a fifth of India’s more than three million infections.

The pandemic has also cast a shadow on the ongoing Ganesha Chaturthi festival, with Hindu devotees ordered to sharply scale down celebrations and rituals honouring the much-loved elephant god in a bid to limit the spread of the virus.